Nick Waites was recently recognised as a Teesside Hero

The Middlesbrough & Teesside Philanthropic Foundation has recognised Nick as a Teeside hero for his services working for the Finlay Cooper Fund and Middlesbrough FC legend Colin Cooper has poured praise on him and his fellow unsung community champions after the trio received their awards in recognition of the work they do behind the scenes for the former Boro star’s charity. 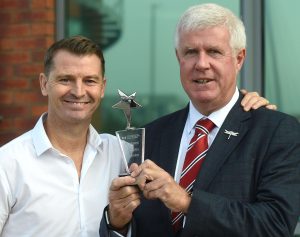 Nick, Graham Fordy and Lee Bramley are trustees of the Finlay Cooper Fund, a charity set up by Colin and his wife Julie after they lost their son in a tragic choking accident shortly before his second birthday.

Money raised by the charity goes to many individual children’s causes, along with local children’s hospices and similar organisations.

Since launching almost 12 years ago, the fund has raised nearly £600,000, thanks to the support of hundreds of big-hearted backers including many Boro fans.

Former Hartlepool manager Colin, who made more than 400 appearances for Boro between the ages of 18 and 39, said: “Nick, Graham and Lee are 100% deserving of the title Teesside Heroes.

“They truly deserve it because they are just selfless people who give their time, effort, energy and expertise for the benefit of others free of charge, particularly disadvantaged local children.

“I can give them no greater praise than to say the Finlay Cooper Fund simply wouldn’t exist without them.

“Julie and I wouldn’t have known where to start without their support, so we can’t say thank you enough. We’re lucky to have them.”

All three men have been involved with the charity from the start, with Lee – partner at commercial law firm Endeavour Partnership – taking care of legal issues, while Nick looks after the charity’s financial issues.

Graham said: “The award was totally unexpected but a great honour. I don’t support the Finlay Cooper Fund for the plaudits but it is nice to know that others respect what you are attempting to do to help those who are a little less fortunate.

“To see joy on the faces of the children we help or relief on the faces of parents when we tell them we will fund an operation not available on the NHS has always been thanks enough, but this award will be a treasured possession.”

Nick said: “The Finlay Cooper Fund is our way of giving something back, but it’s very humbling to get this sort of recognition.”

Fellow Boro fan Lee, who is also a trustee of Teesside Philanthropic Foundation, who made the awards, added: “I got involved in the charity to help Colin and Julie do some good in memory of Finlay. I never imagined we’d still be going strong all these years later, having raised £600,000. But now would be the worst time to stop because raising £1m sounds even better!”

Nick, Graham and Lee received their awards in a surprise presentation by Karen Eve of Philanthropic Foundation patrons Castlegate Shopping Centre at the Foundation’s Annual Ball, which raised a best-ever £77,000.